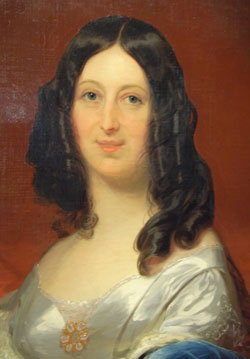 Mary Allport painted miniatures, landscapes and studies of flora and fauna. Flowers in the wild, rather than in formal gardens, apparently appealed to Mary Allport as subjects. In 1855 she exhibited a chess table at the Universal Exhibition of Industry in Paris which featured painted wildflowers in the squares of the board.

Mary Allport was born in England, and came to Hobart with her solicitor husband in 1831. They took up land which they intended to farm but, when it became apparent that the land would not support them, her husband resumed his legal career. Both husband and wife were intellectuals with a particular interest in natural history, and both were founding members of the Tasmanian Society, which later became the Royal Society of Tasmania.

Mary Allport was Tasmania's first professional woman artist. She exhibited in local exhibitions and published lithographs. She advertised her professional services as a portrait miniaturist and gave painting lessons to her children and their friends.