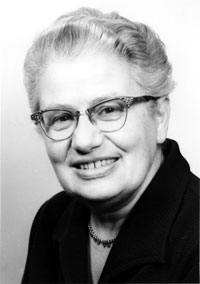 Nancy Tyson Burbidge was born in Yorkshire, England, in 1912, and came to Australia with her parents as a young child. After graduating in science at the University of Western Australia she was awarded a scholarship from the University to spend eighteen months at the Royal Botanic Gardens, Kew, England, in 1939 and 1940. At this time she undertook the first of several studies of Australian grass genera. The results of these studies contributed to her Master of Science degree from the University of Western Australia.

During the next three years, Nancy Burbidge continued her studies of the Western Australian flora, both in the field and in the herbarium. In 1943 she was appointed assistant agronomist at the Waite Agricultural Research Institute in Adelaide and began working on the regeneration of native pastures in the arid and semi-arid regions of South Australia.

A turning point in her career came when she was appointed to the new position of systematic botanist in the CSIRO Division of Plant Industry in 1946. Apart from organising and extending the herbarium collections and providing an identification service for colleagues in the CSIRO, she initiated what was to be a continuing feature of her career, the provision of assistance to all Australian plant taxonomists, wherever located. This was done mainly through her work for the Systematic Botany Committee of the Australian and New Zealand Association for the Advancement of Science, and as liaison officer at Kew in the early 1950s

The period from 1955 to 1970 was perhaps the most productive in Nancy Burbidge's career. During this time she published her Dictionary of Australian Plant Genera , a comprehensive paper on the phytogeography of the Australian region, and studies of the plant groups Nicotiana , Sesbania and Helichrysum . During the latter part of this period she completed the Flora of the Australian Capital Territory with Max Gray, also of the CSIRO Division of Plant Industry, and three regional volumes of Australian Grasses, all beautifully illustrated with her original line drawings. In 1961 she was awarded the degree of Doctor of Science by the University of Western Australia.

Later in her career Dr Burbidge became increasingly involved in the preparation of a new Flora of Australia , a project of keen interest to her ever since it was first mooted many years before. Nancy Burbidge was the obvious scientific leader for this project and in 1973 she was relieved of her responsibilities as Curator of Herbarium Australiense (now the Australian National Herbarium) to enable her to work full time on it.

Dr Burbidge was made a member of the Order of Australia in 1976 in formal recognition of her services to botany in the widest sense.

In addition to her many scientific publications Dr Burbidge wrote about botany in simple terms for the interested lay person. Many non-botanists had their first introduction to the wonders of the Australian flora through Nancy Burbidge's writing and will remember her with gratitude for awakening their interest with articles in the National Parks Association ACT Bulletin under the title 'Eyes or No Eyes'.

It might be thought that such an outstanding record of botanical achievement would have left little time for other activities. Such thought would greatly underestimate both Dr Burbidge's energy and wide range of interests. She took part in, and often led, the activities of many cultural and scientific societies and associations, which united to develop the concept of a memorial to her in the Australian National Botanic Gardens, resulting in the Nancy Burbidge Amphitheatre on the Eucalypt Lawn.

One project deserving special mention was Dr Burbidge's keen involvement in the proposal for a large national park in the southern part of the Australian Capital Territory. Unfortunately it was not until 1979, two years after her death on 4 March 1977, that the Gudgenby Nature Reserve (now Namadji National Park) became a reality.

Dr Burbidge was generous in sharing her time and abilities in the interests of science, conservation, education and international friendship. It is fitting that she is commemorated in the Australian National Botanic Gardens where children and adults may gain a better understanding and appreciation of the Australian natural environment and native flora.


Source: From a 1980 leaflet about the Nancy Burbidge Memorial Amphitheatre at the ANBG

Extracts below from a two-part article titled "Nancy Burbidge: botanist and visionary" from the ACT National Parks Association Bulletin, March and June 2007

Nancy Tyson Burbidge was born on 5 August 1912 in England at Cleckheaton, Yorkshire. Her father, William Burbidge, was a clergyman who was appointed to the Anglican parish of Katanning, Western Australia, in 1913. Nancy appears to have inherited some of her forward thinking from her mother, Mary Eleanor Burbidge, who opened a primary school at the Katanning rectory and in 1922 founded the Katanning (Kobeelya) Church of England Girls's School where Nancy received her early education.

Nancy's early career after her graduation from the University of  Western Australia with a BSc in 1937 started with the prize of a free passage to England awarded by a group of shipping companies. She spent 18 months at the Herbarium at the  Royal Botanic Gardens, Kew, where she revised the Australian species of the  genus Enneapogon.  She returned to Perth to study the ecology and taxonomy of Western Australian plants before becoming  assistant agronomist at the Waite Agricultural Research Institute in Adelaide where she worked on the regeneration of native pastures in South Australia's arid and semi-arid regions.

"The CSIRO prefab building that originally housed the Herbarium Australiense, now known as the Australian National Herbarium, a repository of dried plant specimens mainly from all over Australia and New Guinea, was an unpretentious but homey building. With its lino floors, stacks of plant specimens on counters and pungent smell of naphthalene, it was Dr Nancy Burbidge's workplace. Nancy, or Nance as some colleagues called her, had originally been appointed in 1946 to the Division of Plant Industry's new position of Systematic Botanist, later becoming the Herbarium's Curator. Her special field was systemic botany.
On hot summer days punctuated with the shrill reverberations of cicadas, a soporific calm would descend on the Herbarium. Bustling steps and a call of "Edna!" would give the lie to any thoughts that staff might be enjoying an extended siesta. Nancy had a deep, distinctive voice. "Ghost!" Edna D'Arnay murmured at the end of one of her lunch breaks as she swung her feet from desk to floor, ready for action. Edna, Nancy's assistant, would then spend the next few hours scrutinising plant specimens, checking their characteristics while Nancy read out the descriptions. Both worked doggedly, checking specimens, probably against Nancy and Max Gray's key for the Flora of the ACT. They would stop only for tea or to answer inquiries via the phone or from visitors."

Nancy channelled her energy, botanical expertise, and intellect in many directions, one of which was as the principal founding member of the National Parks Association (NPA) ACT in 1960, and as the driving force to establish a national park for the national capital. She also helped lobby for Molonglo Gorge and Gibraltar Falls Reserves as well as Tidbinbilla Nature Reserve.

Nancy was founding Secretary of NPA, President in 1962 and 1969, and a Committee member for 11 years. In 1972 she became NPA's first honorary life member. Despite not having children of her own, Nancy was relaxed with the younger generation and realised the importance of tapping into children's curiosity and fostering it to awaken an interest in the wonders and secrets of the bush. Often with a cigarette dangling from the comer of her mouth, Nancy would explain the parts of plants or their peculiarities, in language that all could understand.

Nancy's interests outside botany were varied and philanthropic. She supported several causes, including improving educational opportunities for Aboriginal women via scholarships, and working towards the establishment of a women's hall of residence at the University of Papua and New Guinea. Jean Currie remembers Nancy's support for Aborigines who were trying to establish a base in Redfem and her feeling that they should have been allocated a building.

Nancy was a member of the Pan-Pacific and South-East Asia Women's Association ACT, the Royal Society of Canberra, the Australian Federation of University Women and the Australian Systematic Botany Society. Ail these organisations, along with NPA ACT, contributed to the Nancy T. Burbidge Memorial, a small, peaceful amphitheatre at the eucalypt lawn in the Australian National Botanic Gardens, which was opened in 1980.