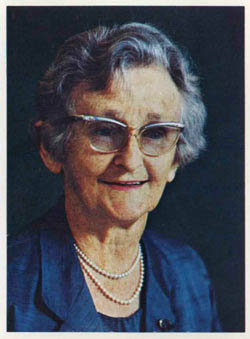 Daisy Wood (née Bail) was born at Wallington near Geelong, at a time when this part of Victoria was still mostly virgin forest. Some of her earliest memories are of roaming in the bush with her parents and elder sister, revelling in the profusion of beautiful wildflowers among the wattles and gum trees. Her favourite subjects at school were nature study, drawing and painting.

At the age of seventeen Daisy was able to specialize in these subjects; but painting in water colours came later when, for a short time, she studied the technicalities of that medium under Mr A. D. Colquhoun Senr., a well-known Melbourne artist.

At the end of World War I she married the late Thomas Wood, who was pioneering in the Mallee, near Mildura. After four years, they moved with their two young daughters to Melbourne and then to Cranbourne, West Gippsland — one of the best localities for wildflowers.

Another daughter and one son were born at Cranbourne where Daisy, in her spare time, began painting the native flora on Christmas cards for sale. However, after a move back to Wallington, she determined to concentrate on larger portraits of wildllovvers. Eventually she held three exhibitions of her pictures in Geelong and one in Hamilton, and several smaller exhibitions in aid of various charities. An artist friend advised her to show paintings in Melbourne; so, over the years, seven exhibitions were staged at Kozminsky Gallery and in the Tasmanian Tourist Bureau, all with conspicuous success and very favourable press reviews.

Examples of her artwork: