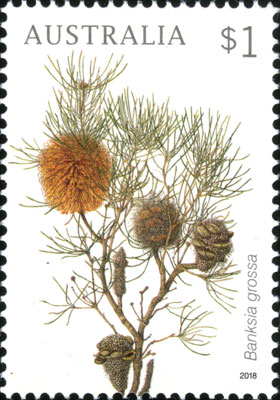 This is one of a series of four Banksia stamps based on the paintings of Celia Rosser.

The specific name is from the Latin 'grossus' meaning coarse, referring to the thick leaves.
It is a shrub to 1m with golden-brown flower-heads that dry and remain after flowering.
It is a slow-growing shrub preferring an open sunny site with well-drained sandy soil or
gravelly loam. It tolerates dry spells once established.
Distribution: Western Australia, between Eneabba and Regans Ford.