Looking at the Cerrado: plants from the heart of Brazil

The Botanic Gardens' exhibition 'Looking at the Cerrado' features botanical illustrations of plants from the Cerrado region of Brazil. 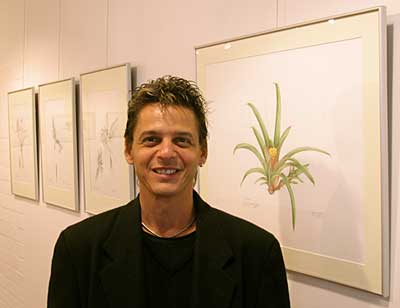 Artist Jeanitto Gentilini lives in Brazil and has travelled to Australia to exhibit his works at the invitation of the Embassy of Brazil.

After the Amazon rainforest, the Cerrado is the second largest of Brazil's major eco-regions. It extends across 1.75 million km2 of the central Brazilian Plateau, and covers 21% of the country's land area. It is the world's most biologically rich savannah region, displaying a range of vegetation types including tree and scrub savannah, grassland and scattered trees and occasional patches of dry, closed canopy forest.

The nutrient poor soils of the Cerrado are well drained to cope with the wet season that delivers an average of 125-200 mm of rain between October and April each year. A distinct dry season produces severe drought conditions for the remainder of the year, supporting a unique array of drought and fire adapted plant species.

The Cerrado's extraordinary biodiversity includes over 10,000 species of vascular plants, 780 fish, 180 reptile, 110 amphibian, 830 bird, 95 mammal species. Approximately half of all plant species in the Cerrado are listed as endemic, and there are 22 threatened plant species and 5 critically endangered plant species.

For over 20 years artist Jeanitto Gentilini has contributed botanical illustrations to research publications about Brazilian plants. He has also being involved with significant landscape architecture projects. He has continued his study of botanical illustration and landscape architecture at the Gama Filho University, Brazil, and the Royal Botanic Gardens, Kew.

Looking at the Cerrado: plants from the heart of Brazil is on display from 21 October until 28 November, 2004, at the Visitor Centre.